Earthquake, any sudden shaking of the ground caused by the passage of seismic waves through Earth’s rocks. Seismic waves are produced when some form of energy stored in Earth’s crust is suddenly released, usually when masses of rock straining against one another suddenly fracture and “slip.” Earthquakes occur most often along geologic faults, narrow zones where rock masses move in relation to one another. The major fault lines of the world are located at the fringes of the huge tectonic plates that make up Earth’s crust.

Little was understood about earthquakes until the emergence of seismology at the beginning of the 20th century. Seismology, which involves the scientific study of all aspects of earthquakes, has yielded answers to such long-standing questions as why and how earthquakes occur.

Little was understood about earthquakes until the emergence of seismology at the beginning of the 20th century. Seismology, which involves the scientific study of all aspects of earthquakes, has yielded answers to such long-standing questions as why and how earthquakes occur.

Earthquakes are caused by the sudden release of energy within some limited region of the rocks of the Earth. The energy can be released by elastic strain, gravity, chemical reactions, or even the motion of massive bodies. Of all these the release of elastic strain is the most important cause, because this form of energy is the only kind that can be stored in sufficient quantity in the Earth to produce major disturbances. Earthquakes associated with this type of energy release are called tectonic earthquakes.

Tectonic earthquakes are explained by the so-called elastic rebound theory, formulated by the American geologist Harry Fielding Reid after the San Andreas Fault ruptured in 1906, generating the great San Francisco earthquake. According to the theory, a tectonic earthquake occurs when strains in rock masses have accumulated to a point where the resulting stresses exceed the strength of the rocks, and sudden fracturing results. The fractures propagate rapidly through the rock, usually tending in the same direction and sometimes extending many kilometres along a local zone of weakness. In 1906, for instance, the San Andreas Fault slipped along a plane 430 km (270 miles) long. Along this line the ground was displaced horizontally as much as 6 metres (20 feet).

Earthquakes are sometimes caused by human activities, including the injection of fluids into deep wells, the detonation of large underground nuclear explosions, the excavation of mines, and the filling of large reservoirs. In the case of deep mining, the removal of rock produces changes in the strain around the tunnels. Slip on adjacent, preexisting faults or outward shattering of rock into the new cavities may occur. In fluid injection, the slip is thought to be induced by premature release of elastic strain, as in the case of tectonic earthquakes, after fault surfaces are lubricated by the liquid. Large underground nuclear explosions have been known to produce slip on already strained faults in the vicinity of the test devices.

A separate type of earthquake is associated with volcanic activity and is called a volcanic earthquake. Yet it is likely that even in such cases the disturbance is the result of a sudden slip of rock masses adjacent to the volcano and the consequent release of elastic strain energy. The stored energy, however, may in part be of hydrodynamic origin due to heat provided by magma moving in reservoirs beneath the volcano or to the release of gas under pressure.

There is a clear correspondence between the geographic distribution of volcanoes and major earthquakes, particularly in the Circum-Pacific Belt and along oceanic ridges. Volcanic vents, however, are generally several hundred kilometres from the epicentres of most major shallow earthquakes, and many earthquake sources occur nowhere near active volcanoes. Even in cases where an earthquake’s focus occurs directly below structures marked by volcanic vents, there is probably no immediate causal connection between the two activities; most likely both are the result of the same tectonic processes.

Earthquakes have varied effects, including changes in geologic features, damage to man-made structures, and impact on human and animal life. Most of these effects occur on solid ground, but, since most earthquake foci are actually located under the ocean bottom, severe effects are often observed along the margins of oceans.

Earthquakes often cause dramatic geomorphological changes, including ground movements—either vertical or horizontal—along geologic fault traces; rising, dropping, and tilting of the ground surface; changes in the flow of groundwater; liquefaction of sandy ground; landslides; and mudflows. The investigation of topographic changes is aided by geodetic measurements, which are made systematically in a number of countries seriously affected by earthquakes.

Earthquakes can do significant damage to buildings, bridges, pipelines, railways, embankments, and other structures. The type and extent of damage inflicted are related to the strength of the ground motions and to the behaviour of the foundation soils. In the most intensely damaged region, called the meizoseismal area, the effects of a severe earthquake are usually complicated and depend on the topography and the nature of the surface materials. They are often more severe on soft alluvium and unconsolidated sediments than on hard rock. At distances of more than 100 km (60 miles) from the source, the main damage is caused by seismic waves traveling along the surface. In mines there is frequently little damage below depths of a few hundred metres even though the ground surface immediately above is considerably affected.

Damage to man-made structures, such as roads, bridges, dams and buildings from ground motion depends on the type of construction:

This aerial photograph of the San Fernando earthquake in Feb 1971 shows the extensive damage to the freeway bridge as the Earth’s crust shook.

“Earthquakes don’t kill people, buildings do”. This quote is from Seismologists who believe that human construction and buildings crashing down during earthquakes are the cause of most deaths.

This photo shows the extreme danger presented by seismic shaking to people in the open around buildings and on the street. Complete facades of buildings, electric signage and windows crash and collapse onto the street below. It is known to be far safer to shelter under robust furniture than to run out onto the street.

Fires, often associated with broken electrical and gas lines, is one of the common side effects of earthquakes. Gas is set free as gas lines are broken and a spark will start bringing “inferno”. To complicate things water lines are broken and so there is no water to extinguish the fire. The San Francisco earthquake of 1906 caused 90% of damage by fire. 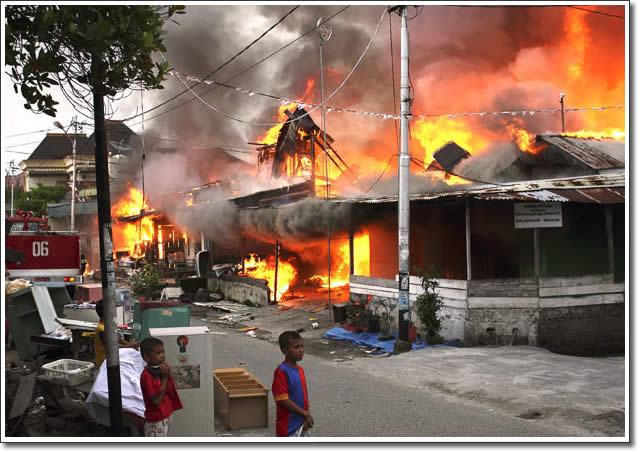 (1) Improve your home’s earthquake resilienceEvaluate your home’s earthquake resilience, and improve it through steps such as fastening down furniture and putting anti-shatter coatings on glass windows.(2) Stockpile water and foodstuffsYou should have at least three days’ worth of drinking water and foodstuffs stockpiled. You should also have radios and flashlights prepared.

(4) Discuss disaster preparedness with your familyVerify how you will get in touch with each other and where the relief shelters are.

2. What To Do After an Earthquake

(1) The first two minutes after an earthquake

(4) From the fourth day onward

3. What To Do During an Earthquake